A little while ago I decided to do a solo hike for the first time ever. I had asked a few friends to go with me, but it didn’t work out, and no way was I going to let that stop me from getting out of the house on the weekend. 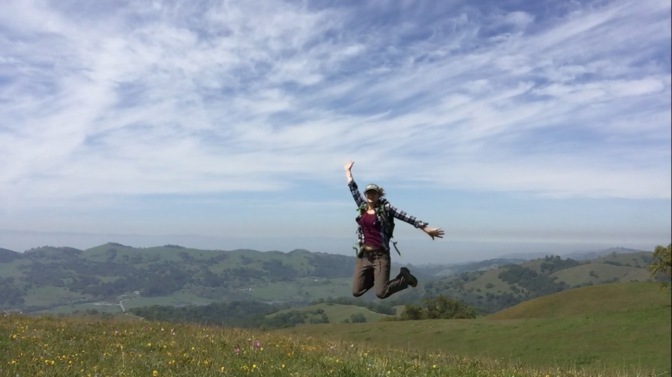 I decided to explore Joseph D Grant Regional Park since my boyfriend had gone there a few months before and said it was beautiful.

I failed at working up early, so I didn’t leave my apartment until around 10:30am. Fortunately, I live fairly close, so I arrived at the parking lot at 11am. I parked at the lot near the lake since it is free to park there and it is right by the trail head.

I wasted no time and got started right as I arrived. For the first 1/2 mile of the hike, the trail follows the road, which is no fun. The cars that drive by were all loud and right next to me, but I just had to bare with it because quickly I left the road in the dust.

A quarter mile in, there was an offshoot to the left that I decided to follow. After a quick glance at the map, I determined it was probably the Loop Trail. It was a negligible distance to add to the hike, but it did allow me a chance to get into the woods a little and get away from the road for a short bit.

It was crazy how different it was in this small loop.

The tree coverage brought an eery silence. I kept hearing things rustle around in the brush that had me 100% convinced I was going to be eaten by a mountain lion (I probably need to work on my courage).

Quickly I met back up with the original trail and continued on around a bend to the left that finally got me away from the road. The next mile or so was uphill.

There were views of rolling green hills… 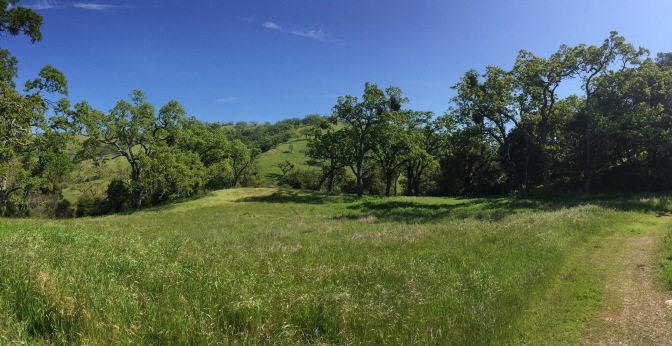 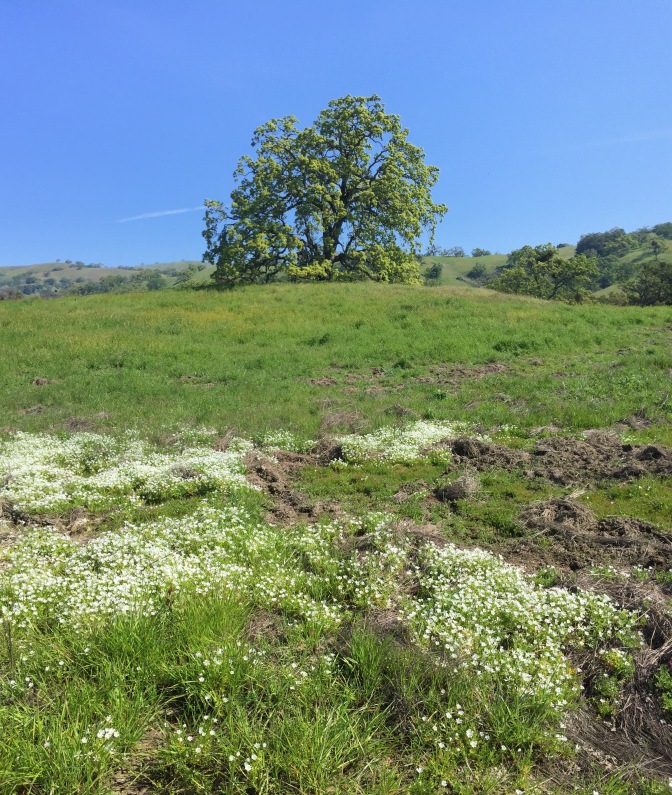 …and a plethora of wildflowers! 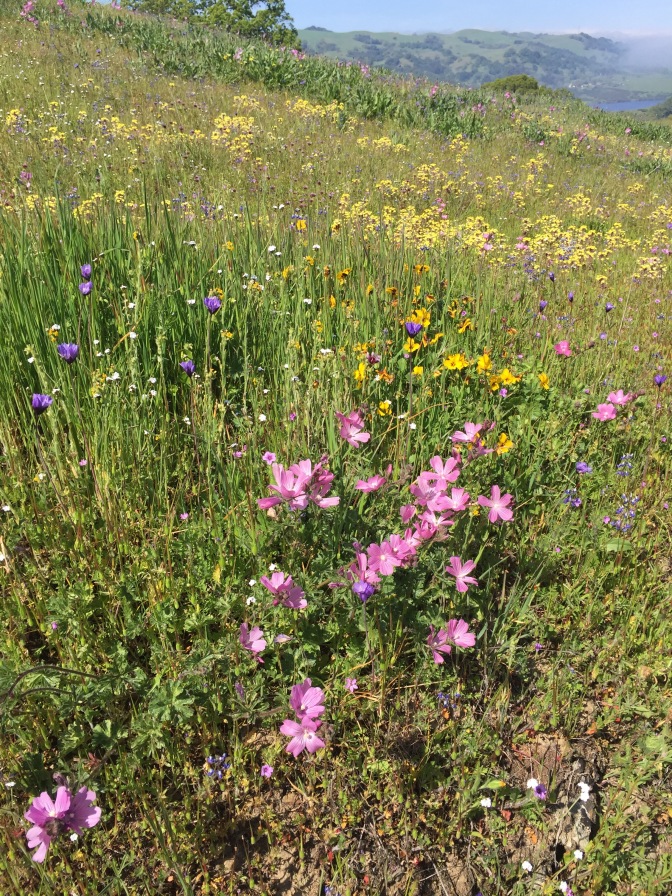 I got some pretty neat photos of the fog around the valley coming up from San Jose as I got higher before all the fog burned off.

I found a little pond nestled down in the crux of the hills.

I found a bench and used it to get myself in some of the photos. 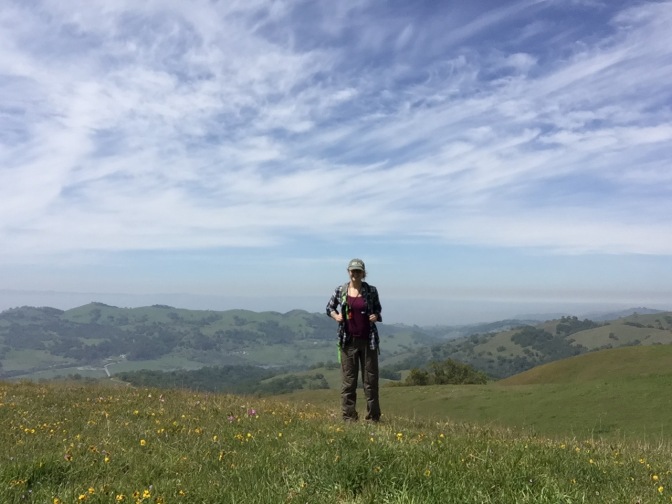 There were a ton of cows and they were so creepy!

The minute they heard me coming, they would stop what they were doing and all stare. It’s unnerving because it always seemed like they were contemplating attack. 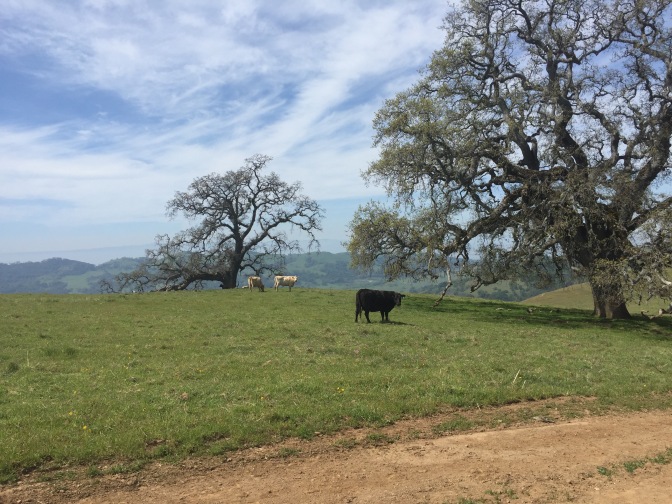 I looked it up online, and apparently you should not walk through a herd of cows (oops) and also make sure you walk slowly and calmly. My theory at the time was to just avoid eye contact and say aloud “Hello cow, I am a human. I am not here to harm you. Please resume eating grass.” It kind of worked, I mean, I didn’t get charged! If you want to read more about cow-hike safety, there is actually an article in Mercury News, by Joan Morris, with some great (cow) tips. Check it out here.

At this point, I was having such a great time that I decided to extend my hike. It was supposed to be an 5-mile hike where I turned at Halls Valley Trail, but instead, I decided I wanted to go out to Antler Point, which added an additional 5 miles. 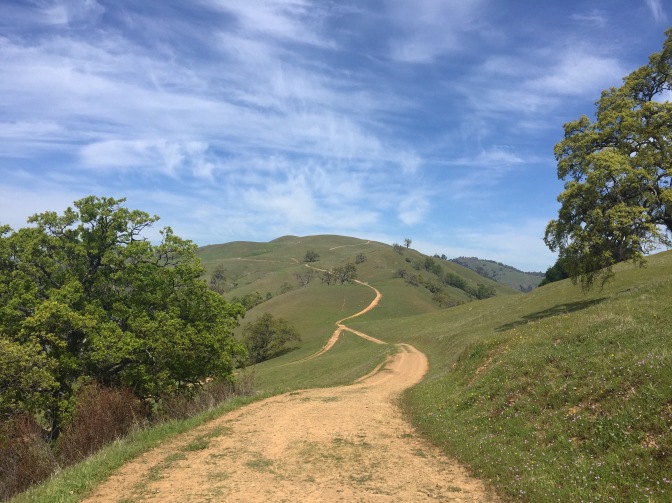 The initial incline was very steep, but there were all-new views offered from the backside of all of the hills.

As I wound my way across the hilltops, weaving in and out of herds of cows, I started to feel a weird uneasiness here. Maybe it was being out in the unknown on my own with the loudness of my own thoughts at odds with the heavy silence, but I felt weird. The rest of this section of the hike I felt like this.

I don’t mean to be dramatic, and don’t let it stop you from doing this hike, I just want to share my experience. I felt very vulnerable being alone. Every hiker that passed (and there were only 4 the whole hike) I watched carefully because you never know who is out there… Anyways, it all really made me think a lot. I want to keep doing solo hikes so I can get over my fear (maybe someday I’ll even get over my fear of the dark!) and at the same time, I want to learn self-defense to raise my confidence in my abilities.

…but from the top, you can see all the way to the city of San Jose (given that it is clear) and the way the trail winds through the valley and it is all beautiful.

There is even a cute bench at the top to stop and enjoy a snack. Woe is me who did not bring one.

It’s a great short burst of cardio too 😉

There was a Point of Interest I went past that was the ruins of a cabin owned by Joseph D Grant.

Apparently him and President Herbert Hoover were friends when they went to Stanford together and the president even came to visit Grant at this cabin in 1928! Yay history!

The terrain changed a bit as I came out of the hills. There was a giant boulder I climbed.

The lands became flat, with a small creek running through. There were plains to the left with the green foothills I hiked on earlier to the left, and to the right there were small hills covered in trees. 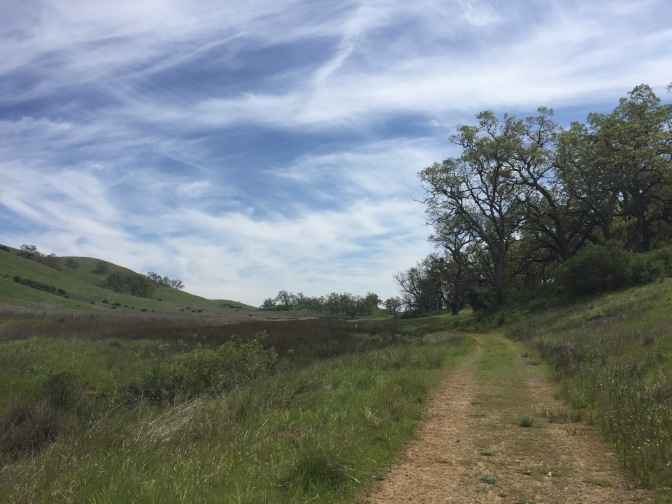 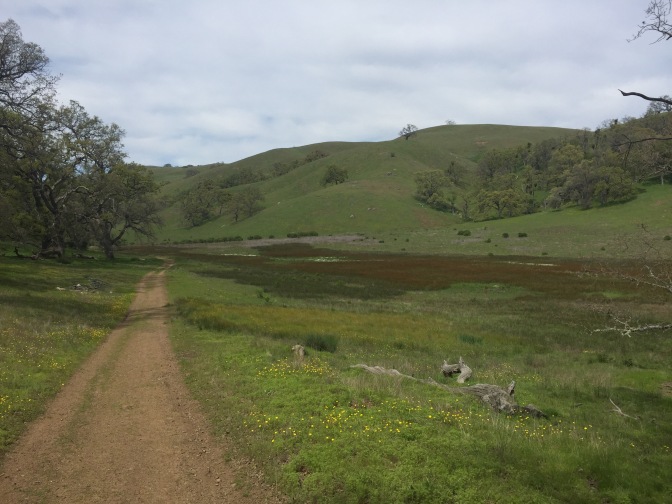 I saw a TON of squirrels here. Every few steps I walked, I would see 3-4 scurry in the fields or run across the trail. One even let me get really close to him!

I came to a fork in the road. To the right was another loop trail (one that I want to come back and do soon!) and to the left was my way back. I took the turn to the left and walked under a grove of oak trees. The shade was welcome as well as scenic.

Finally I made it back to where I had split off from my original hike.

The last 2.1 miles were starting to get very exhausting but I was granted lots of shady trees to keep me out of the sun.

Finally I could see the lake and knew I was back at my car!

Joseph D Grant is a spectacular park with over 50 miles of trails available! They take you up into the hillside to give you views, usher you down into the valleys to enjoy streams and shady oaks, and bring you through fields of grass and wildflowers. This park is definitely one of the best things to do in the South Bay.

The trail I did totaled up to 9.9 miles. 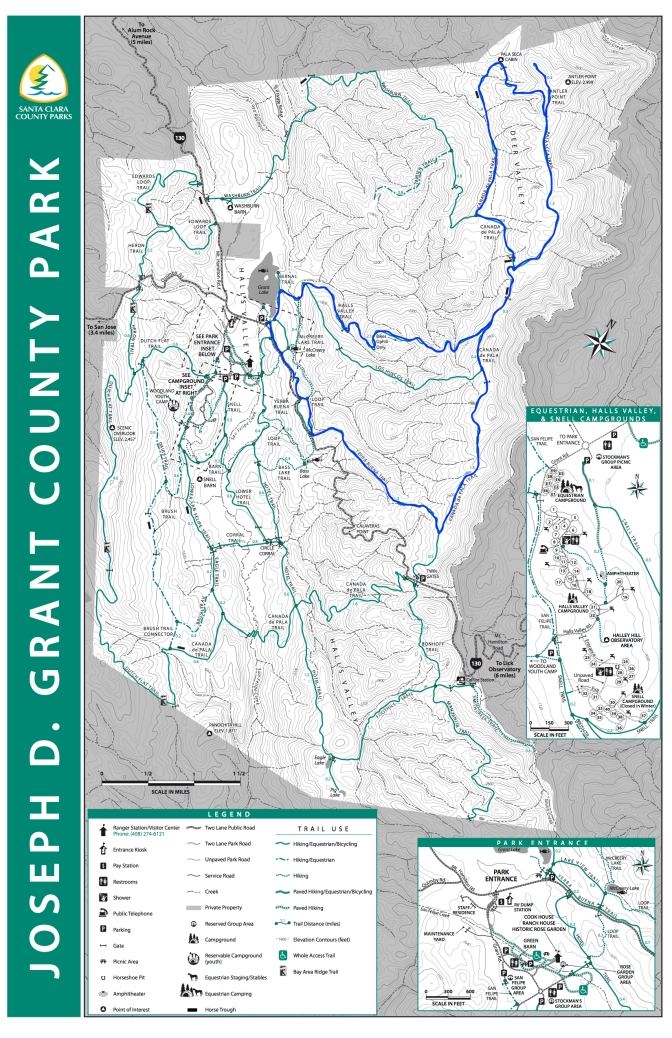 To print your own map, click here, although they also provide them at the parking lot for free. Check out Santa Clara County’s website for more information on the park and the activities they offer.

To follow the trail I originally set out to do (without the addition of the loop to get to Antler Point), go to EveryTrail.

If you want beauty, adventure, and seclusion (besides cows), head to Joseph D Grant! Bet hurry and go soon while the wildflowers are still blooming! 🙂