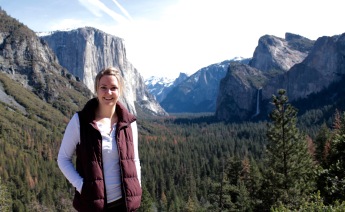 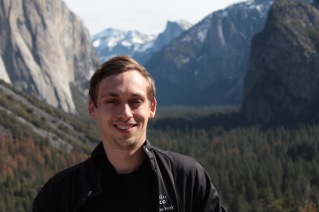 This past weekend Jon and I made a short trip out to Yosemite. Neither of us are really equipped for camping in under 40 degree weather, so we decided to stay in a hotel. It ended up working out really well since we were still recovering from being sick.

We left from San Jose on Saturday morning and drove down via US101->CA152->CA41->CA140. The drive itself was beautiful. There were rolling green hills the whole way through Gilroy and again once we were about an hour and a half away from Yosemite.

At one point we could even see the snow-capped Sierras in the distance.

The closer we got to Yosemite, the more mountainous the region became. The hillsides were covered in yellow flowers. 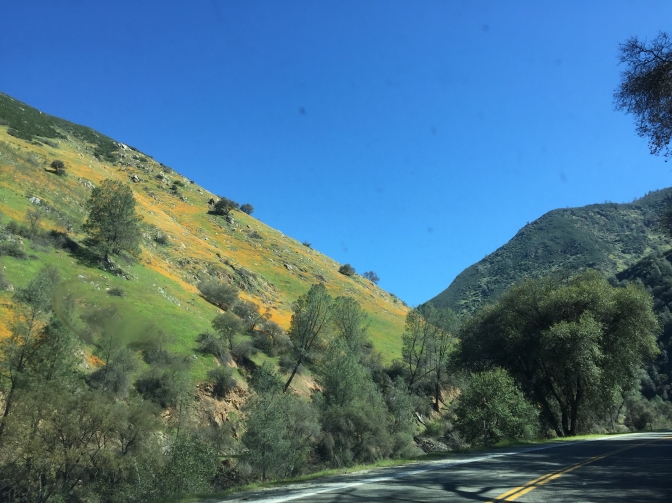 The drive was smooth the whole way there. We didn’t encounter any traffic, the only obstacle we saw was a rockslide that blocked a portion of the road.

There was a detour to the other side of the river with a short span of 1-way road that will stand until the original road is cleared and rebuilt.

We stopped at our hotel in El Portal around noon to check in and then we made our way to the park. Our plans for the rest of Saturday were to walk around Yosemite Valley and then try to catch the Firefall at night.

We were very excited to see the waterfalls this trip because last time we visited Yosemite National Park was over the summer when we hiked Half Dome (I’m writing a #tbt post for that that will come out soon!). Since California has been in such a severe drought, all of the waterfalls, rivers, and Mirror Lake were all very dry. 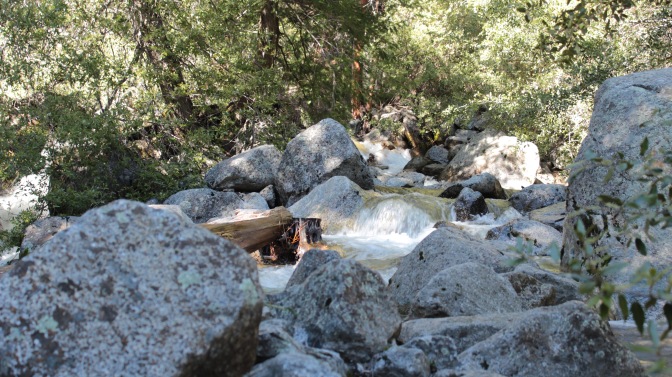 We noticed a large waterfall right from the road and pulled over to enjoy the misty air. 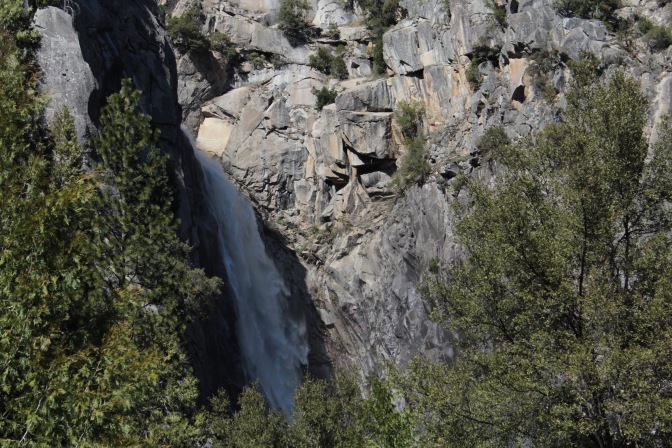 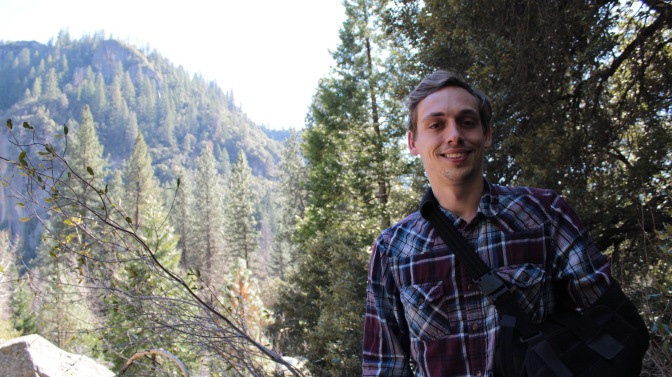 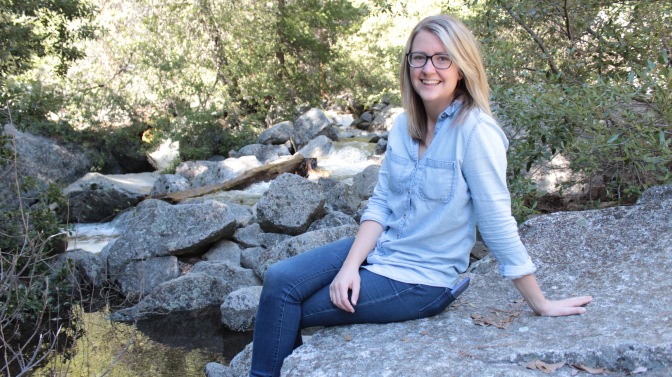 After a bit of exploring we got back into the car to keep making our way to the valley. Even though there was a bit of snow on the surrounding mountainsides, the weather in the valley was gorgeous. When the sun was out, it was probably 60-65 degrees F, so we rolled the windows down and enjoyed the fresh air.

Our next stop was Bridalveil Falls. 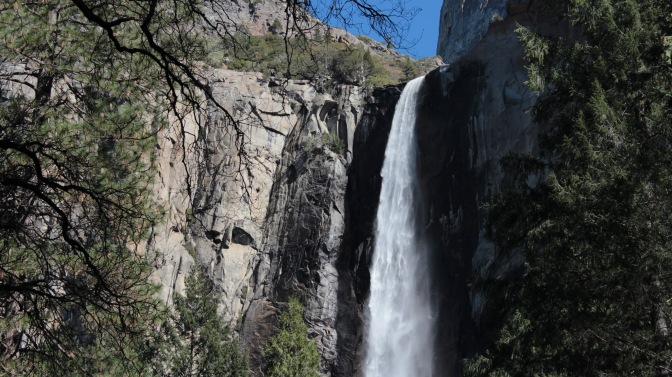 There were a lot of other people with the same idea as us so it took a but to find a parking spot, but it was so worth it. 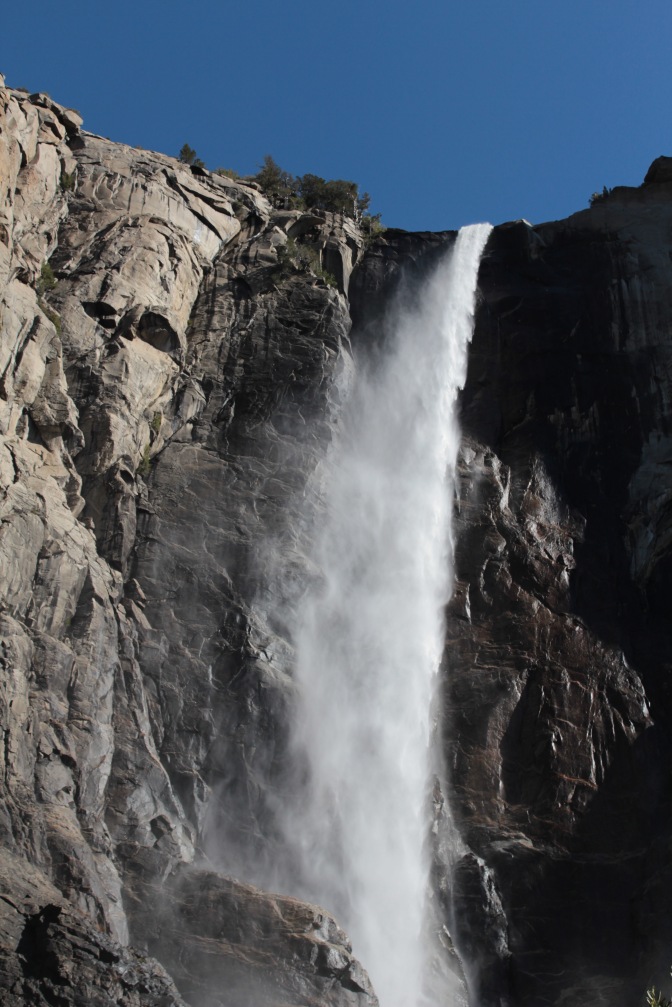 The spray in the air from the falls was so strong we could see it in the trees as we walked back towards the parking lot. 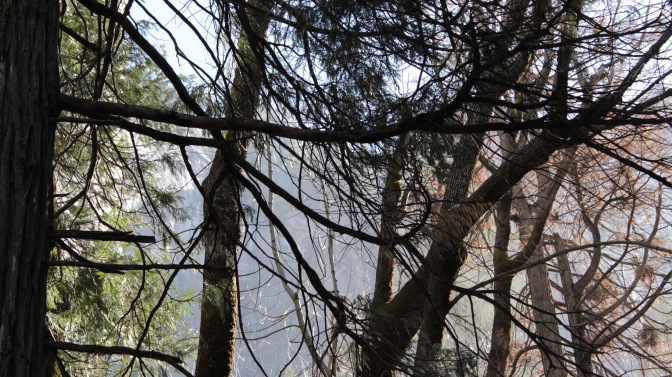 Next we decided to try and find a parking spot in the main part of the valley and continue our exploring and photograph-taking on foot. We were lucky enough to snag a spot in Curry Village, so we went towards Yosemite Falls next.

The famous waterfalls were flowing strong! 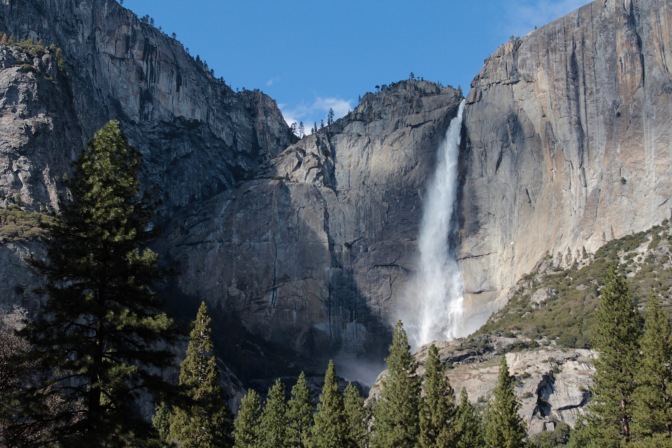 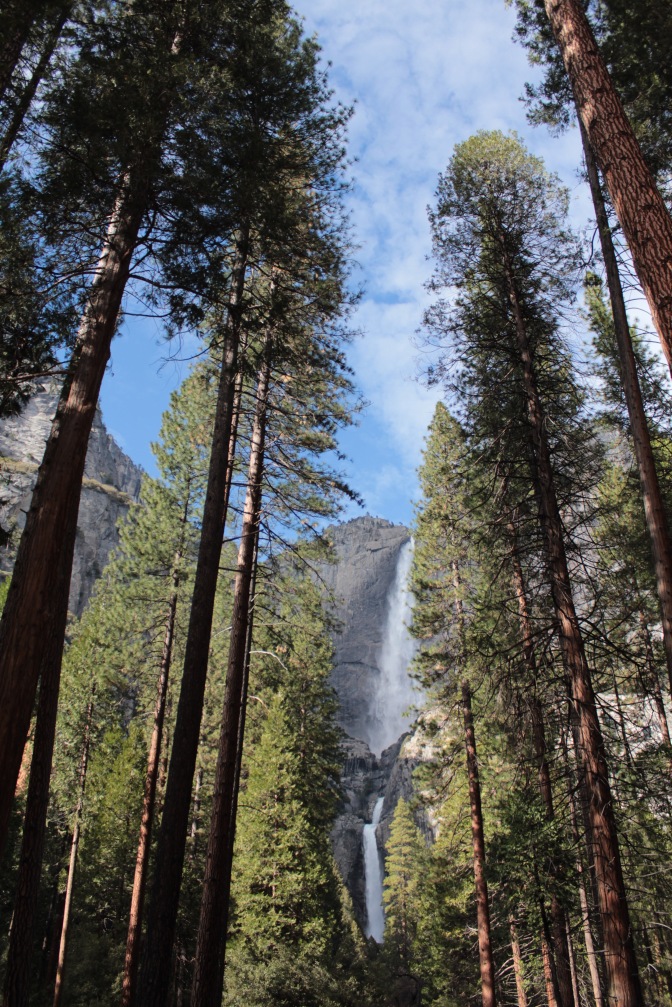 It was crazy to see because only 6 months ago we scrambled over the rocks and were swimming at the base. 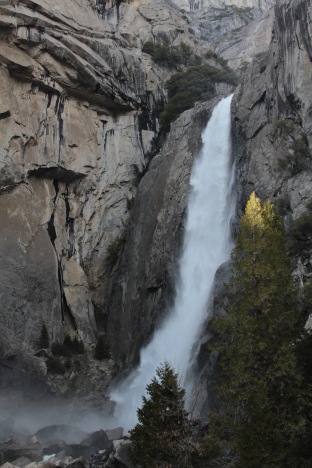 That would definitely be impossible to reach now. 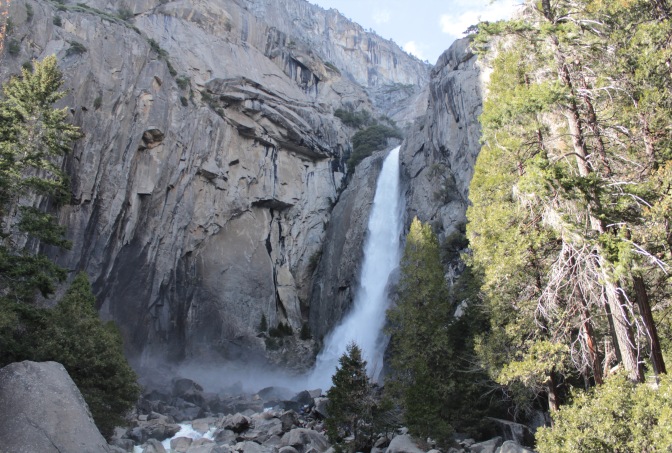 We spent some time on the loop trail enjoying the river. 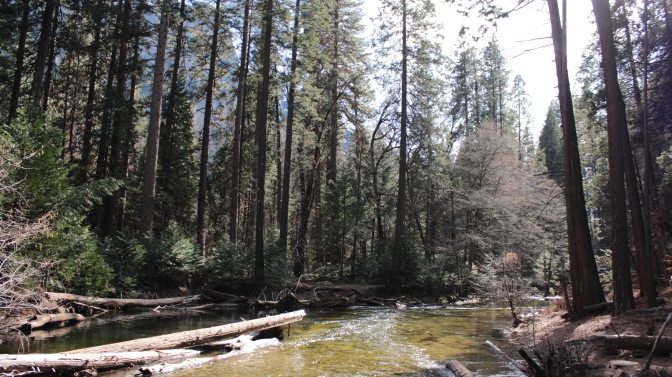 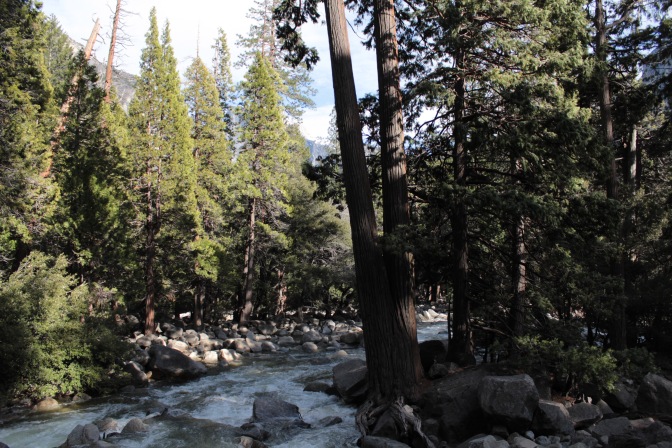 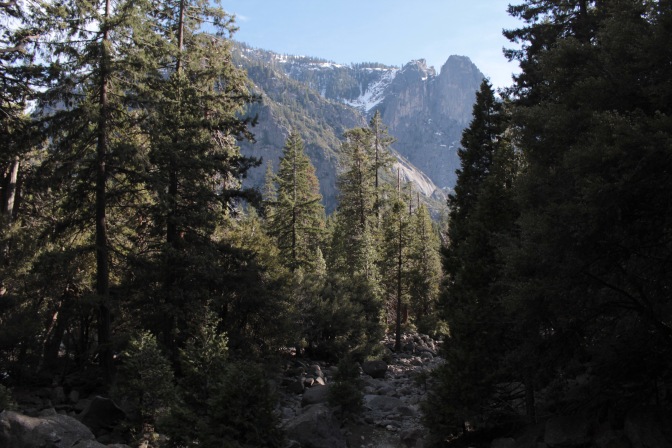 Jon even snagged a walking stick! 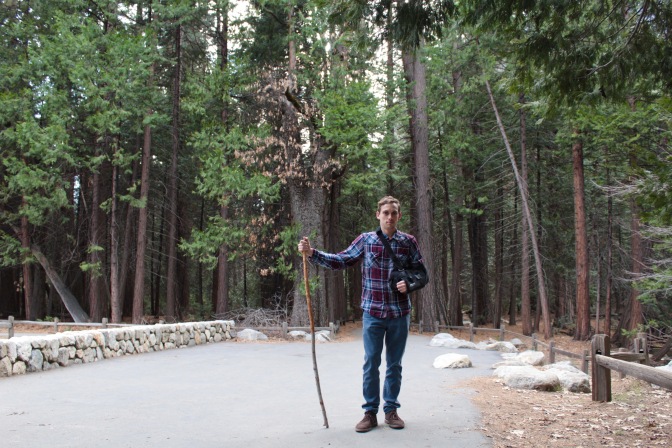 After our small loop hike to see Lower Yosemite Falls, we headed back over the meadows to the car so we could eat lunch. 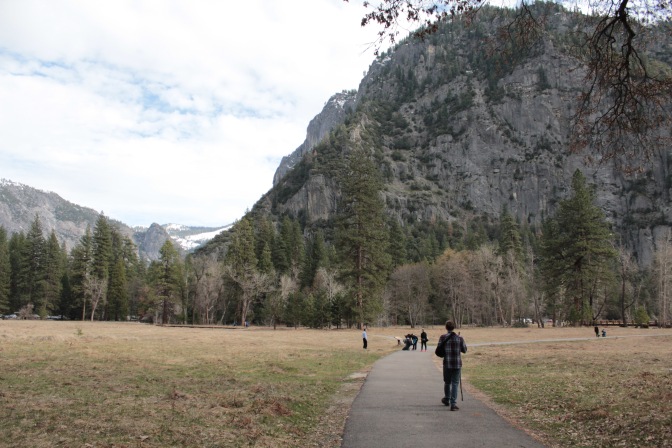 After munching on PB&J, sriracha pretzels crisps, and kalamata olives, we decided to try and get over to Horsetail Falls in an attempt to see the firefall.

In case you don’t know what firefall is, it’s a phenomenon that happens for only two weeks every February during sunset at Horsetail Falls. If all of the conditions are right, it looks like fiery lava is flowing off of El Capitan instead of water! To read more, go to www.yosemitefirefall.com.

There was tons of traffic heading to the spot near El Capitan so we ended up parking on the side of the road and walking about a mile.

We eventually settled on a spot almost directly beneath the waterfall but a little to the right so we could still get a good angle. 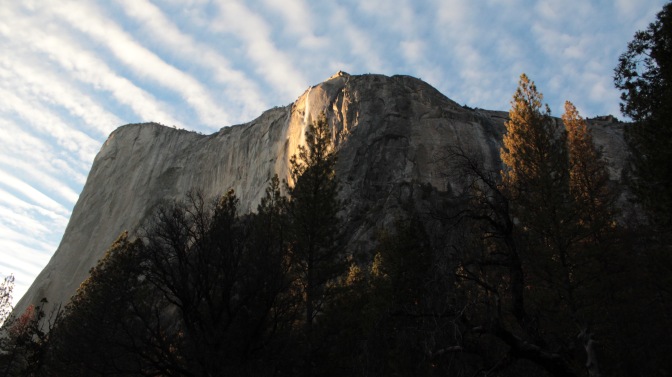 Eventually some of the space around us filled up. We met a man who was a professional photographer (he had some sweet beefed-up cameras!) that we got to chat with for a bit. He said he works for hospitals by providing photos of nature because it helps the patients feel more calm. He told us that back in the 1950s when he was a kid, he experienced the firefall from Glacier Point (different than the firefall we were seeing). That was an event during the summers when people would push an entire bonfire off of the edge of Glacier Point. Apparently it was an amazing event to behold, but unfortunately they don’t do it anymore. Head over to www.yosemitefirefall.com again to read about the Glacier Point firefall.

Sad to say, we missed the true firefall by about a day, but the good news is that we still got some beautiful pictures. 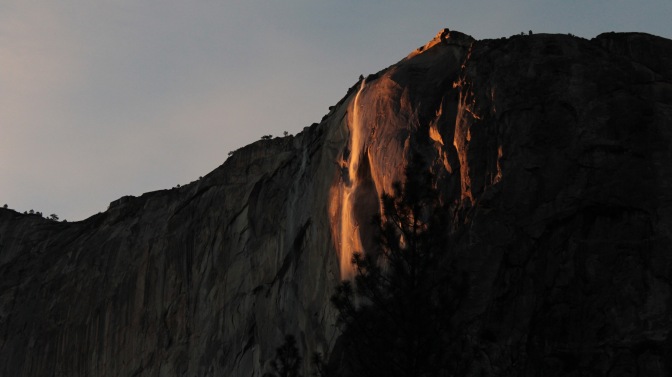 Check out my timelapse of the sunset.

After the sun set, we joined the massive line of cars exiting the park. Once back at our hotel, we had dinner and then went to sleep so we could get up semi-early for our snowshoeing adventure!

Waking up early may have been a bit ambitious…we didn’t end up leaving the hotel until around 10:00am so we didn’t get to Badger Pass until around 11:30am. It took us a little longer because we had to stop at some incredible viewpoints. 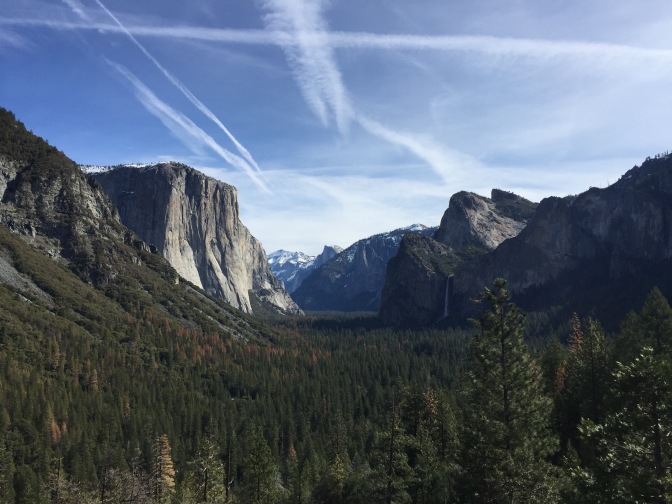 “As long as I live, I’ll hear waterfalls and birds and winds sing. I’ll interpret the rocks, learn the languages of the flood, storm, and the avalanche. I’ll acquaint myself with the glaciers and wild gardens, and get as near the heart of the world as I can.” – John Muir

Once we arrived at Badger Pass, we made our way to the little trailer unit that handled snowshoe rentals and got our gear. It was pretty expensive, $24 for the day, so if you can manage it and know you’ll be hiking more than 1 day, I would recommend renting your gear beforehand. Check out SportsBasement, Mel’s Sporting Goods, or REI.

It definitely took us a few minutes to get used to walking in snowshoes. It wasn’t hard, it just requires a slightly wider stance than normal. 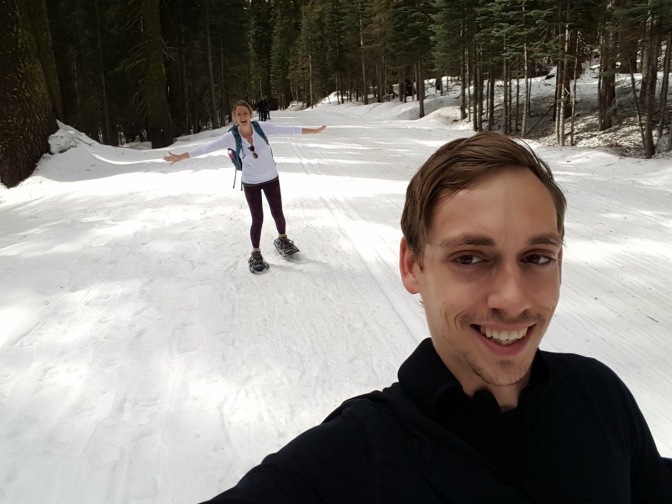 A few notes about snowshoeing for newbies:

This was both of our first times walking in snowshoes and we had a ton of fun stepping in  the fresh powder and marveling at how we didn’t sink! There were plenty of foot-holes from people that tried to brave the trail in regular shoes (which honestly was probably pretty doable for a lot of the hike).

We decided to hike to Dewey Point via the Meadow Trail, which is a 7 mile roundtrip hike. The journey to Dewey Point can also be made by going on the Ridge Trail, but it is slightly longer (8 miles round-trip) so we decided we should stick with the shorter trail since it was our first time in snowshoes and we were both still recovering from colds. 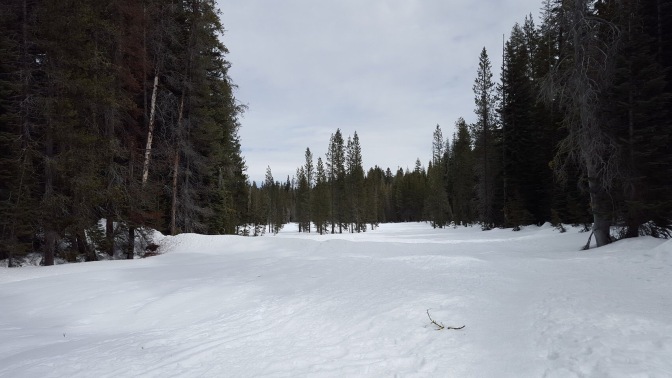 We started on Old Glacier Point Road, then after 1.3 miles, we made it to the offshoot for Meadow Trail. From there, it was 2.5 miles to the point. The meadow part of the trail was gorgeous. For most of the time, we didn’t see any other snowshoers or cross country skiers so it was serenely silent besides the crunching of snow beneath our feet. 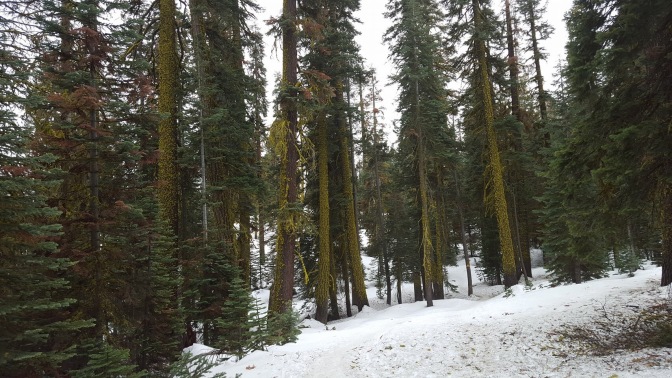 For the first mile of the Meadow Trail, we got to take in great expanses of open space with untouched snow. After that, the remaining 1.5 miles was more hilly and covered in trees. The trees had this beautiful and vibrant green moss covering them that was very enjoyable. 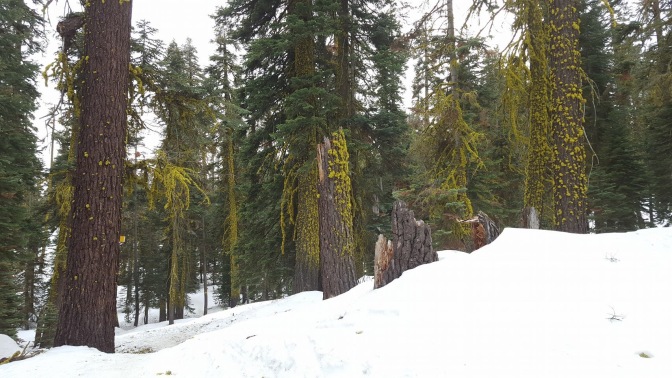 We made it to Dewey Point at about 2 hours into the hike. It was very cold but the views were unreal. 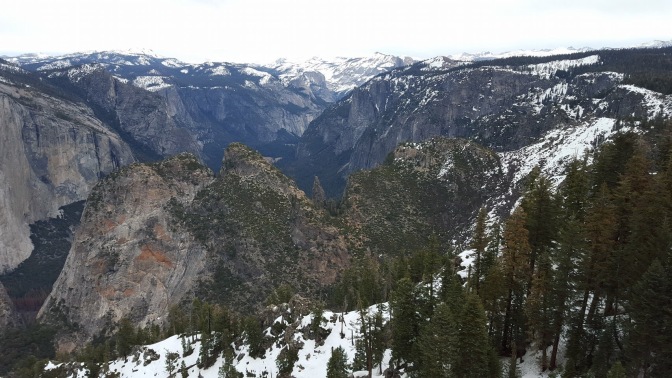 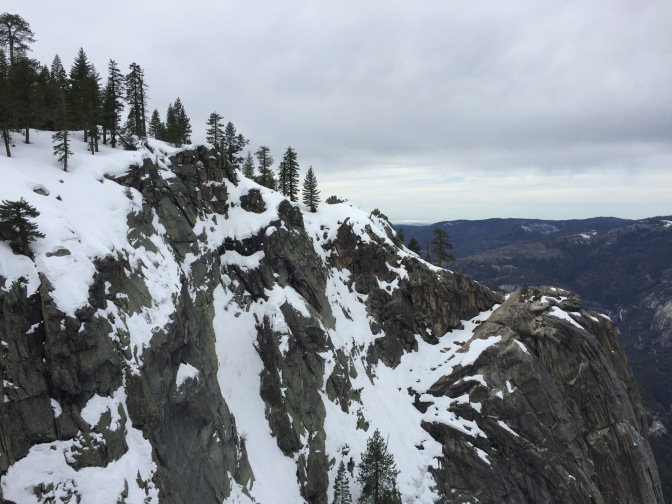 We stayed at the viewpoint for about half an hour so we could get some rest and eat our lunches before heading back.

As I mentioned before, there are two trail options to get out to Dewey Point. If you have a little more energy and time than we did, it is very easy to make this hike into a loop hike! Take the Ridge Trail out and the Meadow Trail back, or vice versa. This will bring your total mileage to 7.5 miles. Or, if you want a longer hike, take the Ridge Trail out and back, which brings your total to 8 miles.

Check out this trip on EveryTrail to see the loop version. You can also see the Dewey Point snowshoeing trip of another awesome blogger at californiathroughmylens.com.

Click here for more information on winter hiking and trails in Yosemite from the National Park Service.

Yosemite is a great place to begin snowshoeing because it didn’t involve very much incline but still delivered grandiose views. We’ve had a ton of snowfall this year in California, so head out there before the summer sun starts to melt it all up!

Have you gone snowshoeing before? Share your tips and stories in the comments!