I know I mentioned skydiving a few posts ago, but I can honestly say that hiking Half Dome was the scariest thing I’ve ever done. 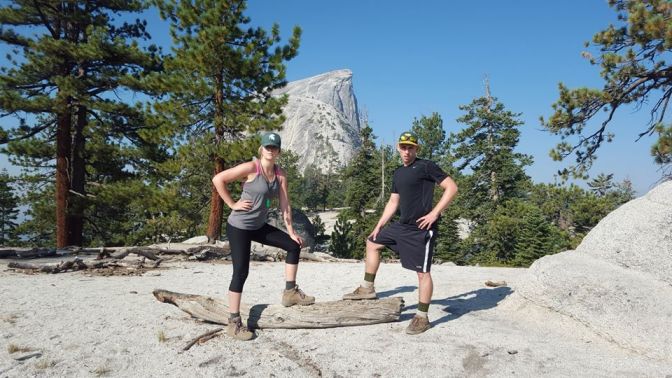 If you don’t know, Half Dome is an out-and-back 16-mile hike that includes 4800 feet of elevation gain. That alone is enough to make it intimidating. Add on the 56 degree (according to HikeHalfDome) climb up the slick granite surface at the end…I almost wanted to say “count me out!”

But I’m so glad that I didn’t.

A few months prior to our hike, my roommate Luke obtained 4 permits to hike to the top of Half Dome. Because of all of the foot traffic and danger of the trail, Half Dome is difficult to maintain so they do require (and enforce) permits. You can hike all the way until the last half mile of the trail, but they keep a ranger at this point that will stop you if you don’t have the proper documentation.

To apply for a permit, check out the National Park Service website, here.

To get a head start on what we knew would be a long day, we stayed the weekend at Yosemite. We camped at Upper Pines since it was close to the trailhead for Half Dome.

Being the scaredy cat that I am, I was super paranoid about bears and mountain lions stalking us until the sun came up. I even scared the living soul out of a poor fox that snuck up on us by screaming bloody murder because I thought it was a mountain lion!

The rest of the hike up was very uneventful, but not boring in the slightest. After a long stretch of flat and wide trails, we started up a series of switchbacks through a forest that was teeming with squirrels and deer. Even in a summer of drought, we were able to enjoy some green.

The mood of the group really started to pick up when we began to notice granite on the trail: that meant we were getting close.

As the path began to steepen, my heart started beating faster and was I was getting more antsy about finally reaching the top.

The switchbacks on the open-face granite were a little scary because of how slick they were…plus they were littered with people who were tired, scared, or some combination of the two.

So far, this only stood to motivate me to move on. Even when the dreaded cables came in to view, I was feeling apprehensive, but ready. I knew what to expect.

After a quick water and snack break, I donned by garden gloves and began the climb.

Oh boy did my mood change. After about 2 minutes of slow climbing up the cables I started to panic. What was I doing? I have no arm strength! One false move and I would fall to my doom, probably bringing down another number of poor fools with me! 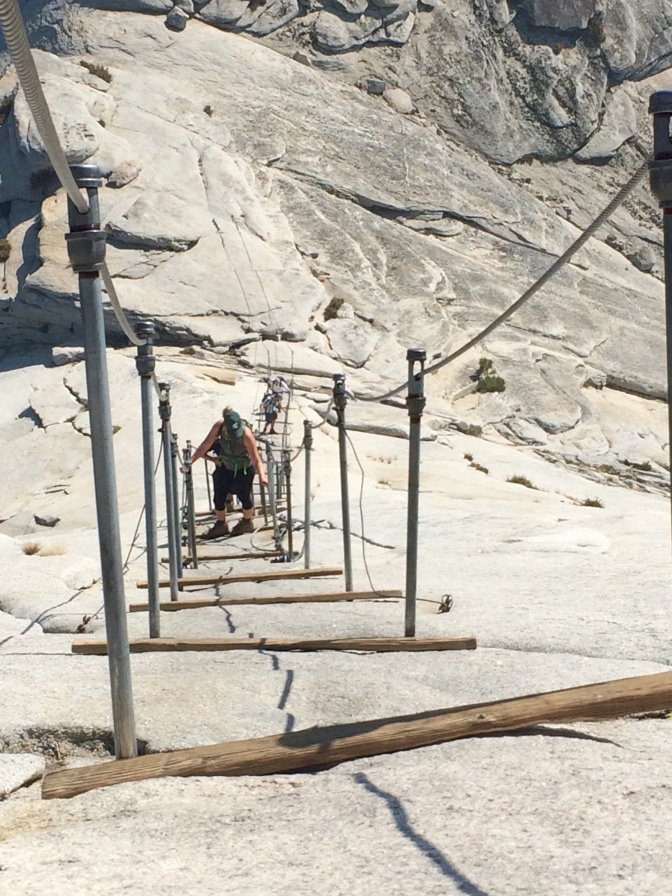 If it wasn’t for Jon encouraging me to keep going…I’m not sure I would have made it to the top.

After a half hour that felt like an eternity, I was on flat-ish land. I fell to the ground and cried (I have no shame).

Nothing. Nothing in the world that I’ve seen so far compares to the feeling of being on top of Half Dome and knowing that your body brought you up there…not a car, not a plane…just you. 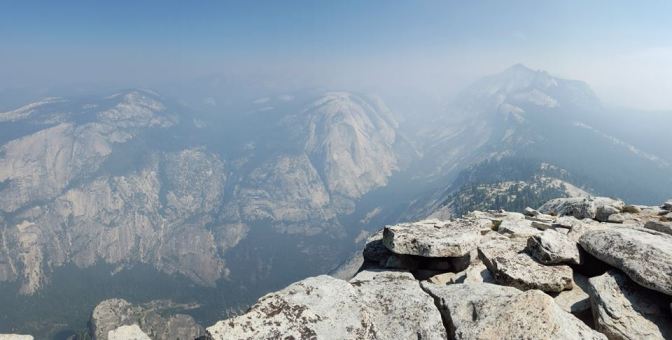 Pictures will never do it justice, you need to go for yourself if you can.

…we went back to the cables to make our way back down.

The downward journey was not scary for me at all compared to the way up. I preferred to go down at an angle and hold one cable with both hands. I thought it felt easier since many people were still coming up and had to pass by.

Jon, Luke, and Elena all preferred to go down backwards with one hand on each cable. To each his own, although Jon said that watching me go down the way I did made him super nervous. I felt very safe, at least. 🙂

After getting down the majority of the slippery granite switchbacks, Jon and I split off from Luke and Elena. They wanted to go at a bit of a faster pace, and Jon and I were slowing a bit since we were too stupid to pack ourselves a lunch.

The remainder of the hike back became more and more of a struggle. Towards the last 2 miles I ran out of water and was very hungry. All I brought to eat was some granola bars, mixed nuts, and an apple, which was a huge mistake.

If you’re going to attempt this trail bring at least 4L of water and DEFINITELY bring lunch. You need some kind of sustenance to get you through to the end, and definitely much more than just trail snacks. If I ever do Half Dome again, I’m going to bring a PB&J sandwhich and a tuna fish sandwhich, as well as an apple, an orange, and trail snacks. You burn something like 8000 calories on this hike so food is important. Don’t be dumb like me.

Half Dome is in Yosemite National Park, so you have to pay a $35 fee for each vehicle entering the park. Since it’s such a long hike, you’ll probably also want to camp beforehand like we did, which adds an additional $55/night per campsite.

The best spot to camp is in Upper or Lower pines since it is near to the trailhead. You can walk there from camp instead of having to drive or take the buses. If you do want to drive, however, there is a parking lot kind of nearby, but it does fill up fast so get there EARLY.

The trail begins at the Happy Isles trailhead and over the course of the 16 miles, you gain 4800 feet of elevation. Check out EveryTrail for more detailed information about the trail and how to prepare.

I can’t say it enough…be prepared. Bring lots of water, wear sturdy and comfortable shoes, bring food, and do some practice hikes beforehand that are close in length and elevation if you can.

I also recommend having a plan for when you finish the hike. We went on a Sunday so we had to drive all the way back to San Jose after finishing the hike, which was a real struggle. If you can, try to either go on a Saturday or take the next day off so when you’re done, you can eat a huge meal and pass out somewhere. You’ll be so glad you did.

To read more information about hiking Half Dome, head over to the National Park Service.

Last of all HAVE FUN! This hike is probably one of my favorite memories of my entire life and I always feel so proud when I tell people I’ve done it. Yes, there were a few 10-year-old kids who I saw out on the hike that made me feel a little bit less badass, but it’s still a huge accomplishment, okay?! 🙂

Oh, and while this is a #tbt, my dad hiked Half Dome way back in the day. Here’s a neat picture of him at the top!

Check out his Yosemite post here for his most recent Yosemite trip, or just check out his awesome RV blog in general at mobilemosers.com!

Have you hiked Half Dome? Share your stories below!

One thought on “Half Dome: Yosemite #tbt”